We all receive critique, and often not particularly good critique, which can be frustrating. So I am writing a quick guide on what I find in good critiques. Obviously, this is not all inclusive, or an authoritative guide, but I hope it helps those who maybe want to help more and aren’t sure how.


Seems like a no brainer, right? Well, I wish it were. A good critique focuses on specific problems, such as:


… and many more, but you get the idea. If your critique is “this story sucks”, then you haven’t told the author anything. For all they know, it’s just a personal opinion they can’t do anything about - which brings me to my next point…


If you give an author advice that they can’t do anything with, your critique is still unhelpful and uninformative. “Write better” is not actionable advice - “vary your sentence structures” is. While this can sometimes be difficult to do, like when you feel you don’t have the experience to identify the problem, it’s better to be honest about it. “I’m not sure why, but this sentence feels off to me” still focuses on a specific problem for the author to consider. Which once again segues into…


While not always possible, good critiques will often offer the author a specific course of action on how to fix a perceived problem. “Write better” is still not a viable choice - but suggesting a writing guide, or that an author look into the style of another author in their field or genre is. Other examples include showing how you might phrase a scene, or…


Especially when it comes to grammar or formatting, a critique should explain why they feel something needs changing. “This is bad” doesn’t tell an author why it’s bad, so they’re likely to make the same mistake in the future. “It seems kind of weird that an eight year old street urchin knows the intricacies of international trade laws” - while unlikely to be sent in a real critique - addresses the problem and examines why it doesn’t make sense, so that next time a similar situation arises, the author knows why it shouldn’t happen.


Critiques aren’t a negative thing - even when what the critique is saying is negative, critiques are tools for helping an author improve. Just like a sports player might not be able to see that his form is off, a writer might not be able to see when their prose is janky. However, they may also be blind to what they do well - so it’s important to point out those things along with what’s done poorly. “The dialogue feels stilted and uncomfortable, but the way you wrote the cat in that scene was funny and engaging.” It lets an author know that there are things that went right, even if the scene overall went wrong.

Well, that’s it for me. I hope this has been informative and fun. Tell me what you find in good critiques below!
By Aurora Lee Thornton - November 28, 2017 No comments:

So, today I received feedback for my book from the Writer’s Digest 25th Annual Self-Published Book Awards and first, I didn’t even know I was going to receive feedback; second, it was really well thought out and actionable feedback. It did, however, have one point I contended, which I would like to share with you all.

Here is the portion of the feedback I am contending:

"... the most consistent error is found with quotation marks and attribution. When a speaker’s words end and they’re not followed by attribution (he or she said is the most common), there should be a period, not a comma. A new sentence, rather than a clause, should follow. While examples can be found throughout the book, look to page 5 for examples. Every paragraph on the page has at least one example of this issue. To explain further, the sentence that begins with “Sir Timberbrand folded” should have a period after “smile” before he speaks. In the next paragraph, “Order” should have a period, and then “Allaha” should begin a new sentence. While this punctuation rule may seem inconsequential, readers expect familiar road signs, and with a book this lengthy, it can make it very difficult for readers who would otherwise be fully engaged to get through it."

(Prior to this, the judge said that my book could do with a thorough edit, and I agree with that remark.)

Here is the particular passage the judge is referring to:

Sir Timerbrand folded Allaha’s writ of passage and returned it to her with a smile, “We may not have seen each other since we were children, but I insist you call me Alec. You look well, Ally.”


“No one has called me that since I joined the Order,” Allaha tucked the writ into one of her saddlebags. Her tone was sombre, and soft spoken. It was difficult to tell what she thought of the reunion, though it did not seem to bother Alec.

(The three paragraphs prior were character descriptions, thus the initial speaker had not been previously established.)

Now, I am going to quote my reply to this, as I believe any good editor/author relationship is about give and take - as any good critic is. Sometimes, as an author, you have to accept the risk that something will throw a reader off in favor of something else - such as a further plot point or even simply a stylistic preference. (Recently, I had to determine the correct plural of "roof" - what I discovered was that "rooves" was grammatically correct but antiquated compared to "roofs", however, I used "rooves"because I thought the sound flowed better.) This is still a risk, and an editor may advise against it, but as the author, it's your story, and your choice.

Back to the matter at hand, I contended the point of quotation attribution on the grounds that it was grammatically correct but uncommon, making it a stylistic choice - or even a stylistic risk. Grammar Book and Purdue Owl Style Guides make no distinction between whether or not a quotation is followed by an attribution, and the latter of these is a guide utilized by institutes of higher education as writing resource. I could even argue that, during conversations between three or more characters, even if I did not utilize the words "he/she/they said/replied/asked", a break mentioning the character is still an attribution. By not constantly using typical attribution methods in scenes of lengthy dialogue, I am varying my sentence structure and keeping the story flowing.

However, as an avid reader myself, I do understand this is not the established format. When I first started this book, I wrote quotations as the judge recommends. It was actually someone else who suggested using commas instead of periods, and my second reason to continue to propose commas as a stylistic choice has to due with the reasoning he gave. This was my reply to the judge on why else I used commas rather than periods:


To further defend my perspective, it was also suggested by my reviewer to start new paragraphs for actions taken by new characters. That is, to consider body language, facial expressions, etc, as dialogue. I feel this distinction has created much better flow in my characters' interactions, and as these non-verbal cues often accompany spoken word - indicating tone, temperament, or emphasis - that a comma is more appropriate, as the "dialogue" has not been "completed" due to the interruption of non-verbal cues.

I don't know whether or not my judge will get my feedback, but I thought I'd see how others felt about the issue. So here are some questions I have for anyone interested in debating:

I look forward to any discussions below!
By Aurora Lee Thornton - November 21, 2017 No comments: 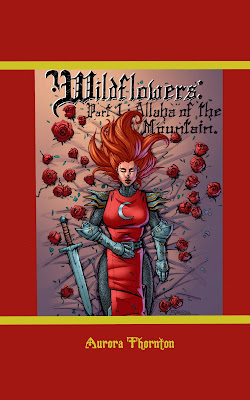 I'm having a digital book signing for Wildflowers, Part I: Allaha of the Mountain!

Get my book personalized, signed and mailed to you at the discounted rate of $10 for the first 28 purchases!

Why 28? Because that's how many physical copies of the book I have right now, so after that I will need to order more, which will raise the price to $12 to cover the cost of shipping to me - but that's still $3 off for you!

(Unfortunately, I will have to back order in groups of $16 to make the shipping price work, so if I can't reach that number, I may have to put off getting more copies.)

I will also offer digital signatures for those who already have my book or would like to purchase the ebook at the sales rate of $1.99!

Ebook copies with a digital signature will be sold at $1.99!

Sign Up at my Square Store Today!
By Aurora Lee Thornton - November 16, 2017 No comments: