Why I Loved the New Power Rangers Movie

So I saw the new Power Rangers movie this weekend and I thought it was awesome! I thought they did really well, considering the source material, and that they really breathed some life into the story.


Getting more into the details (I'll try not to spoil anything, but I can't guarantee it), the first thing they did was give the Rangers an actual plot.


A prehistoric landscape comes into view, with pterodactyls flying in the background. Pan down to a clearly wounded Red Ranger crawling across the ground to an equally wounded Yellow Ranger. He apologizes to her as she gives him her power coin, revealing that under her armor she is an extraterrestrial. The Red Ranger also takes off his armor, revealing he is also an extraterrestrial. He buries the coins, telling them to seek "those who are worthy" and ordering someone to "send the meteor to my location". This is right before Green Ranger Rita Repulsa shows up to attempt to kill the Red Ranger, Zordon. Before she can, the meteor hits - sending Rita into a nearby body of water before closing on a shot of dying Zordon.


Already, we have a story that I find much cooler than the original. Zordon is no longer a random talking head - he's a Red Ranger that lost his team after being betrayed by one of his own. Rita is also a more believable villain - one that has a past, and has shown the ability to kill her enemies.


I've seen some people that are unhappy with this - saying that it's similar to Batman v Superman in making characters dark. However, I disagree - the Rangers haven't been made dark for the sake of being made dark - a problem in B v S - they've been made more realistic for the situation. There are story driven reasons for the more mature take, rather than pushing a take to make the story.


Flash forward to the actual movie - Jason Scott is the star football player of Angel Grove, who ends up crashing a car after a prank gone too far. This messes up his knee and ends his football career, as well as landing him in detention. In detention, he meets Billy Cranston.


Billy is, in his own words, "on the spectrum" - and it made my heart happy just to hear him say it. While I don't have enough knowledge to say whether or not the portrayal by RJ Cyler was accurate, reading his commentary about the character let's me know he at least put in the effort and research to try and make it accurate. And this is such a great thing - an autistic superhero. Autistic. Superhero. How many of those have you heard of before?


And Trini - Trini is an LGBT+ character. Some reviews I've seen have remarked how sexuality isn't touched much in the film, despite including an LGBT+ character. Once again, however, actor commentary makes this make more sense - Becky G has said that Trini doesn't even really know her sexuality, and it still figuring things out. I love this because it is such a cool concept to include, because so often characters that are LGBT+ are very clear on their orientation - and this isn't always the case, especially as a teenager.


Zach is a wild child that sometimes sleeps in a train car in a quarry, who also has a sick mother that he's the only one there to take care of.


Kimberly is a cheerleader that's on bad terms with her squad - and her former friends. And - though I won't say it here - it's for a good reason.


What I love about these Rangers is that they aren't the perfect, squeaky clean teenagers their predecessors were - they're, in the words of Jason, "screw-ups". And you know what? I relate to screw ups, and I think almost everyone does. I lot of my life I felt like a screw up - I made mistakes, some bigger than others, and dealt with (at the time) undiagnosed ADHD. I like these Rangers because they feel like real teenagers - and real teenagers "with attitude", at that. (The most attitude the old Power Rangers had was a positive one.) 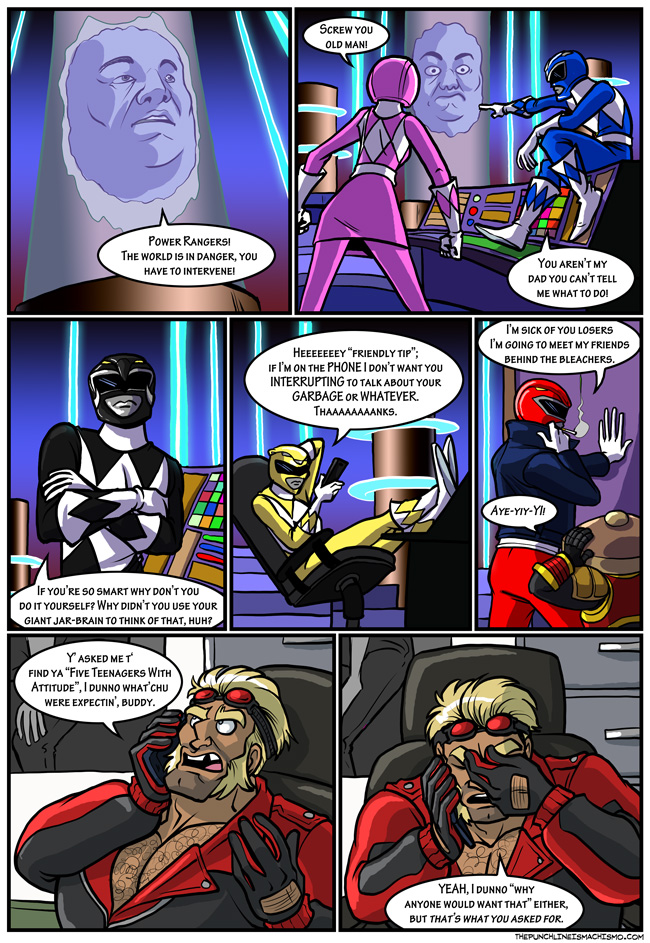 If you want to say the Power Rangers is not the right place to tackle real world issues, I'd like to remind you that this was a show with a Native American, Asian, black, and female main character superhero in the 90s. While today we can recognize that a lot of those portrayals had racist and sexist overtones (the female Ranger was pink, the black guy was the Black Ranger, the Asian girl was the Yellow Ranger), it was still progressive for its time - meaning that the Power Rangers have always taken on these kinds of issues, you just didn't notice because you were a kid.

When I was a kid, I wanted to be the Red Ranger - and I watched all the way from Mighty Morphin' to SPD to never see a female Red Ranger. This didn't stop me from coming up with my own Power Rangers force (Mythic Rangers, I was a dragon), but I can see how it could discourage other girls that they never got to be the leader on the show. This new Power Rangers is pushing the envelope, and giving representation to all kinds of people not used to seeing themselves on screen - so before you bash it for being "darker" or "not enough like the original", try to make sure the image of the old Power Rangers isn't just a bit rosy tinted.
﻿