Beginning a Series Late to the Party - Beautiful People #1

So while looking for more review blogs to submit my book to, I came across Paper Fury and the series they and Sky @ Further Up and Further In created called "Beautiful People". The idea is to answer questions about your characters and get to know them better, and while I am 4 years late to this party (which is sadly taking a hiatus of indeterminate length), I thought it would be a cool way to start talking about my new book - the sequel to Allaha of the Mountain, this book is still in Part I of the Wildflowers Saga and called Dandy.


Without further ado, jumping all the way back to the first post in June of 2014 (told you I was late), here are my answers about the two main characters of Dandy: Dandy and Toru.

1) What is their full name and is there a story behind why they got it?

Dandy "True Arrow"- her real name is Corrina, but she no longer uses it. When she was working as a prostitute in a brothel called the Garden, she was given the "stage name" of Dandelion, and choose to keep it after buying her freedom. "True Arrow" is her bounty hunter title. She earned it from convincing a mercenary company she was working with to shoot her out of a catapult to get her target from behind a siege and surviving.

Katowaro Toru the "Silent Sword"- it's just his family name. He comes from a high ranking noble family. "Silent Sword" is his bounty hunter title. He earned it from his sword being named "for the only thing it leaves in it's wake - Silence". His naturally stoic nature didn't hurt, either.

2) How old are they, and when were they born?

Dandy is 38 and was born in a Northern country called Dorbean. It's a forested region, and she comes from a small village.

Toru is 29 and was born in the country of Korinwa. Korinwa is a mountainous chain of islands that appear to resemble a crescent moon. He was born at his family's estate in the capitol of Eyota.

3) Describe their physical appearance. (Bonus questions: 1. What is their race/nationality/ethnicity? 2. Do you have a picture of them? If so, include it!)

I'll use the book descriptions here.

Dandy: "She had dark brown skin, and wavy blonde hair that cascaded around her shoulders. She glared around the room with eyes as green as fresh grass."

(She's also on the cover of the book, being the title character and all. Wonderful art by @karasawr!) 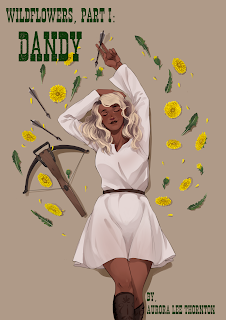 Toru: "The  man at the bar was Korinwanese. His face was long, resembling that of a sheep’s, with large spiral horns at either side of his head. Instead of hair, his head was covered in black wool. He had also combed out a beard, which he tied at the end with a small metal bead. His eyes were blue, with horizontal pupils. He wore a blue, long sleeve wrap shirt and dark pants made out of rough materials. His hands had only two fingers and a thumb, and he wrapped them around his drink as he watched the other patrons."

4) Describe your character’s personality first in one word, and then elaborate with a few sentences.

Dandy - Abrasive. Dandy is a hard person to get along with - she swears, she's an asshole, and a raging alcoholic. On the other hand, she tries to be a decent person when she can - she's just working through her own issues at the same time. A lot of her friends are in similar situations, and so are very patient with her.

Toru - Reserved. Toru is a man of few words - its actually really hard to portray a lot of his character motivations because he doesn't talk to the other characters a lot. He's still expressive in other ways, but being raised as a noble, he has a very serious demeanor and tends to play things close to the chest.

5) What theme song(s) fit their personality and story arc?

I actually have playlists for both of them, though it was easier to find songs fitting Dandy than those fitting Toru, which is why her list is longer. I did decide to cut out songs that were more atmospheric than character relevant for Dandy to try and keep a shorter list.


6) Which one of the seven deadly sins describes your character?

Dandy - Gluttony. She takes everything just a step further than she really needs to, and has a problem with excess.

Toru - Pride. Kind of an obvious one considering the other answers so far, but he does tend to let his social status and inherent responsibilities that come with it get in the way of more important things.

7) If they were an element (fire, water, earth, air), which one would they be?

Dandy - Fire. Though, to be honest, she tends to burn herself more than other people. She can still keep others warm with a good time, but it's best to keep your distance if you can't handle some heat.

Toru - Water. Generally steady and predictable, but able to change when something strong enough moves him. Once he comes to a decision, even changing his mind, he commits to it completely.

8) What is their favourite word?

Dandy - She hasn't put much thought into it, but probably "free".

Toru - Law. He grew up around the law and learning about laws, and finds comfort in the order they bring.

Dandy - her mother, Lina. She died when Dandy was still young. Dandy was her only daughter, so she was a little spoiled despite being a wild child. Her mother encouraged her adventurous side, but tried to curb her bad habits.

Toru - his father, Tonnan. He was murdered, and Toru is currently on a mission to avenge his death. Growing up, Toru always wanted to be just like his father, and they had a close relationship before Tonnan's death.

10) What sights, sounds, and smells remind them of that person?

Dandy - Dandelions, actually - it's the main reason she adopted the name full time. Because of Dandy's green eyes and blonde hair (and how she "grew like a weed"), her mother jokingly compared her to the flower. Also chai tea - it was her mother's favorite.

Toru - Militia members - his family is head of the militia, a position his father was very proud of. The smell of books, paper, and ink reminds him of his father's office at home, where he spent a lot of time learning and watching his father work.